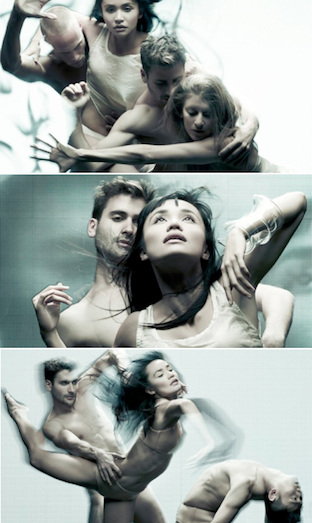 Friend, adversary, lover, colleague, stranger – the different ways we interact with other people are explored in the Sydney Dance Company’s latest work, 2 One Another. Choreographed by SDC artistic director Rafael Bonachela, it’s mid-run at the Sydney Theatre and although The Australian critic Deborah Jones called it “all packaging and no payoff”, I found it quite a stirring tribute to relationships.

The first act establishes the theme, as dancers variously perform solo, in pairs, in groups of three or four or as an ensemble of 16. Their encounters show loneliness and intensity; some couples play emotional games with one another, others play to a partner’s strengths.

The smaller groups of two to four dancers tend to be the most compelling as some of the solos feel a bit awkward (perhaps reflecting the discomfort of some people at the thought of being alone), and sections that utilise the whole cast become almost hypnotic. This latter effect is enhanced by the backdrop of flashing strips of bright white LED lighting, designed by  Benjamin Cisterne.

Combined with the cast’s steely blue-grey leotards with neon green zips running the length of the spine (aesthetically very cool), and the electro-influenced score, there’s a futuristic feel to the whole thing. As the dancers come together and fall apart with great efficiency, I’m reminded of insects in a hive or, better yet, workers in some very slick, attractive sci-fi factory. Their movements and the music come to a climax and then…

The tone flips for the final act. Producer and costume designer Tony Assness puts the cast in short, draped red leotards and the lighting emits a soft, coloured glow (red, green, blue). The dancers’ interactions seem softer, more tender. If the first section is brisk and efficient, the second is tactile and human. It’s almost as though the first depicts the dancers performing themselves 2 One Another, while the second shows them being themselves – and surely both perspectives are valid in the sometimes murky mess of contemporary relationships.

Separating the two sections is a punctuation point of poetry from writer Samuel Webster. Pieces of his texts are voiced throughout the performance, some a mumble, others more lucid but possibly none more striking than this one. “This whole world,” it says, “is you, and me, and silence.”

My name is Michelle and I’m a freelance journalist and editor from Sydney. I mostly write about beauty and fashion (not a bad day job at all) and started The Modernity Project as a way to share more about the incredibly interesting people that I’m lucky enough to meet and interview. You’ll also find news and reviews from the worlds of fashion, beauty, art and design, plus some of my personal life and style. I hope you enjoy it.